As America’s opioid epidemic continues to escalate, the discussion surrounding legalizing medical marijuana has been widely considered as a means to combat it. Currently, marijuana is the most commonly used illicit drug in the United States, with 40 million people 12 years of age or older reporting use in 2017. Although the popular notion seems to be that cannabis is harmless, those following the politics know it’s a heated subject.

The Politics
Marijuana currently classifies as a Schedule I controlled substance on the federal level. Substances in this schedule “have no currently accepted medical use in the United States, a lack of accepted safety for use under medical supervision, and a high potential for abuse.”

If the above is true, many then wonder how cannabis has become available for medical and/or recreational use in 33 states and the District of Columbia. Adding to the confusion is the fact that each state regulates cultivation, distribution, and stipulations for marijuana use differently.

Starting in California in 1996, referendums voted on by citizens at state-level elections have made marijuana available for medical and recreational use in some states. That said, the federal government does not recognize marijuana’s medical potential, largely due to the lack of large-scale clinical trials that prove its medical value.

Unfortunately, it’s difficult to conduct large-scale trials with the classification of a Schedule I drug and the restrictions that come along with that classification. This is why much of the evidence citing the benefits of medical cannabis are obtained from outside the US or from small-scale studies that lack a great deal of credibility. 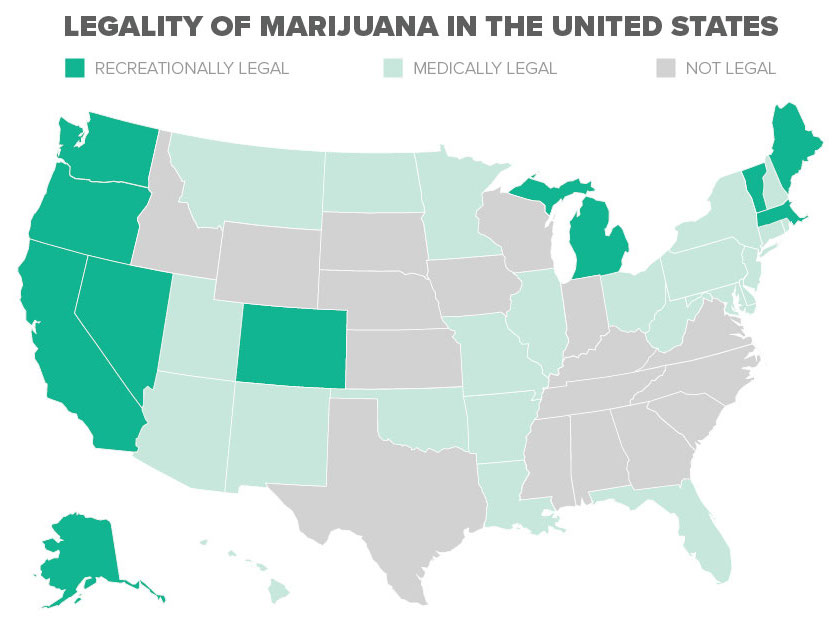 The Pros
The medical utility of cannabis is still being studied with new revelations daily. Current positive evidence of cannabis utility is present for conditions such as nausea and vomiting secondary to chemotherapy, chronic pain and neuropathy, spasticity in multiple sclerosis, weight loss in HIV, and seizure prevention, to name a few.

There are several other prospective disease states in which cannabis has been shown to be beneficial with low or anecdotal quality evidence. One clear benefit was a large decrease in the prescriptions written for pain in the states that have legalized medical cannabis and established guidelines for its use.

The Cons
As with any chemical entity, excessive or inappropriate use in any setting may present problems, and the adverse effects of high ratio THC formulations on the psyche are a concern. Studies done in the UK and Scandinavia have shown increased incidence of ER admissions secondary to psychosis in patients with a history of frequent use of high concentration THC marijuana. This incidence increased by six-fold when the use began in adolescence. This points to a potential correlation between higher THC dose/longer duration of use and the appearance of these psychological symptoms. Other conditions to consider are genetic predispositions to psychiatric disorders, CBD concentration (type of cannabis used), age, and other concomitant health conditions.

Although effects on the psyche, which enables a person to feel, think, perceive, and reason, are the most worrisome adverse event, other potential adverse conditions include tachycardia, palpitations, blood pressure fluctuations, cannabinoid hyperemesis syndrome, and respiratory and central nervous system related impairments. Additionally, cardiovascular side effects present with the use of synthetic cannabinoids and the physiologic and psychotic symptoms of synthetic cannabinoid overdose are very difficult to reverse when they present.

Interestingly, almost 10% of chronic cannabis use in the United States meets the diagnostic criteria for cannabis use disorder. There is an even higher occurrence for those using high concentration THC preparations at a younger age and for a longer period of time. Cannabis withdrawal mimics that of nicotine withdrawal and diminishes quickly over 14 days.

The Unknowns
Cannabis use shows promise for a variety of medical ailments, but there are many reasons to be measured in our approach. Unregulated and unstandardized formulations may present increased health risks and challenges, and advances in science, cultivation techniques, genetic strains, and varying potency have produced a myriad of end products.

However, the expanded use of marijuana increases our opportunity to explore its therapeutic potential. Rescheduling marijuana from its current Schedule I classification would support increased research and clinical trials within the US and would be a first step toward gathering more solid clinical evidence for or against its therapeutic benefit.

Subjects of interest include:

Answering these unknowns with a measured responsibility may result in our best chance of getting the answers we seek, while navigating the complex political climate that still exists.

Disclaimer: The product descriptions “medical marijuana,” “high CBD,” and “low-THC” are often used interchangeably in the media, and no standard definition exists for these individual terms. Source: Science Direct.